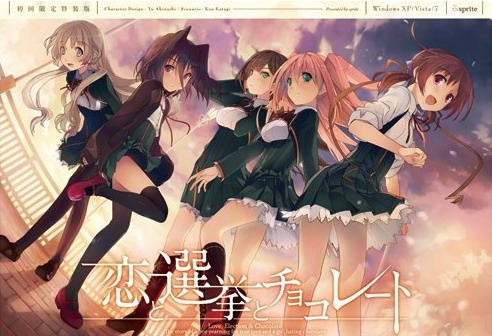 Yuuki, who wants to fall in love, and Chisato, who doesn’t like chocolates. They are lifelong friends and students of the same school. They both belong to the food club with Mifuyu, their classmate. Actually, they don’t do anything everyday, just enjoying chatting… But one day, Satsuki, president candidate of the student council, promises to close the clubs that do nothing. To stop it, they decide to run against her… But who will they send out..? Yes, Yuuki is forced to run for the election… To save the club, he will just need to be the next president!

443 comments on “Koi to Senkyo to Chocolate”

Harukoi Otome
Together with his sister Umi, the protagonist starts attending a former all-girls school which will soon be closed down, supposedly because of deteriorating birthrate. See also: Koiken Otome Noble Works...

Go! Go! Nippon! 2015
The week you spend in Japan will certainly be memorable!!! Get a taste of the foreign travel offered by printed guidebooks. Enjoy a tour around Japan from the comfort of...

Grisaia no Kajitsu
Mihama Academy – on the surface, a closed learning environment established to nurture students who find themselves at odds with the world around them; in actuality, an orchard-cum-prison built to...

MILFs of Sunville
A young guy is forced to leave his luxurious life in a big city behind and return to a small town of Sunville, located near the ocean shore. He dreams...