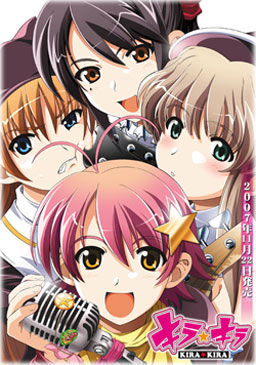 Shikanosuke Maejima is a student at Oubi Academy, a school of a missionary nature. He doesn’t visit his club. He doesn’t put much effort into his studies. All he really does is show up at his part time job. In short, his life could be better.

All this changes when he meets Kirari Shiino at work. Kirari is a strange girl, and soon Shikanosuke finds himself joining a punk band. This is where the story begins.

The members of the band are Shikanosuke, Kirari, Shikanosuke’s childhood friend Chie Isurugi, and a rich yet sickly girl by the name of Sarina Kashiwara. The four of them are members of the Second Literature Club, which has little in the way of active members and which is scheduled to be canceled. The band is their way of saying farewell to their club.

Though ill-prepared for the challenge ahead, the members go through eccentric training, and eventually succeed in rocking Oubi Academy’s cultural festival with their debut performance.

However, their final performance at a local music theater ends up as a hit on the Internet, and they receive requests from theaters far and wide who want them to come and perform.

What now? Exams are coming up, and the families are opposed to the band.

But none of that matters!

The four of them embark on a trip through Japan, armed with their makeshift musical instruments and aboard a rickety van that could come apart at any moment. It is to be their final project as academy students.

Minna Daisuki Kozukuri Banchou
To counter the declining number of childbirths, government decides to activate a plan. All schools across the country will enter contests against each other. The losing school will be shut...

Sakura Fantasy
Sakura Fantasy is an exciting visual novel fantasy adventure where you decide the development of the story by the choices you make. It is the tale of an aspiring novice...

Yamizome Revenger
Kazunori is an extremely normal student. However, his soul became linked with the demon king Cliveherz, who had committed all kinds of impudent acts in another world and was being...

KANOSEN – My Girlfriend is a Naughty Teacher
Hatori Yuu has a problem: his sex drive is so ridiculously strong it’s disrupting his day to day life. Yuu, however, has fallen head over heels for the kind and...

Primal x Hearts
Spring is the season of first meetings. That’s what Kazuma thought when he transferred into Ainoshima Academy in the middle of the spring term. Indeed, the moment he passed through...

Kichikuou Rance
This game is not part of the official Rance universe timeline, forking off after the events of Rance 4.2, as a “What if” episode. The prelude starts with Rance leading...