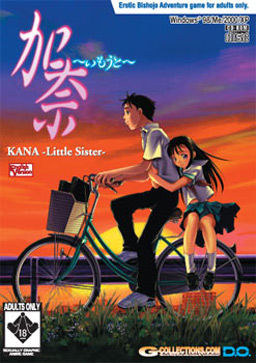 You have a sister two years younger than you. Her name is Kana. She has been ill all her life, and she spends more time in the hospital than at home. Because of this, Kana has always been a higher priority than you. In the past, you have experienced feelings of hatred towards her. However, this all changes one day, and you suddenly find yourself being more and more protective of Kana. Throughout her terrible ordeal, your feelings for each other slowly begin to change. You feel it’s your duty to protect Kana from all harm. After all, you love your sister, and would do anything to save your little sister Kana…even…

My Yandere Sister loves me too much!

Sandwiched by my wife and her sister

My Ass Pass to Succubus Sexland!
Meisa, Rumi, and Riam are the three biggest (in more ways than one) names in high society, way out of the grasp of your humble visual novel protagonist, unless… While...

Utawarerumono
Suffering from a fatal wound, you have lost your memories and were taken back to Eruru’s village. The villagers not only gave you a place to stay, but also a...