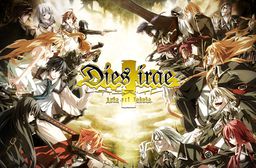 May 1, 1945- Germany.On the eve of Berlin’s collapse, a group of men and women carried out a certain ritual. To them, suffering defeat in the war meant nothing. If anything, the countless lives lost in the battle served as a catalyst to their sacrificial ceremony. Whether or not their attempt bore fruit ― not a soul knows. Following the war, they faded from sight, mind, and eventually into the realm of myth.

61 years later ― Japan, 2006.
Ren Fujii, a young man attending high school in Suwahara City, finds his friendship with his old buddy Shirou Yusa shatter to pieces following a certain incident, ending in a vicious fight that sees Ren hospitalized for two months.
The season shifts from autumn to winter ― to the dawning weeks of December, with Christmas on the horizon. Having lost his best friend, Ren leaves the hospital with the intention to rebuild his new life without Shirou.
But even that plan soon falls apart. Irrationality that defies the realm of common sense begins to assault and devour the city. Abnormalities soon seek to destroy everything Ren holds dear before his eyes with overwhelming violence.
He must change, even if it means crossing the boundary between the ordinary and the extraordinary. His desires are hardly anything grand. All he wants is to return to those days of old. Back to those days filled with simple, everyday joy.
The battle with the Longinus Dreizehn Orden. A continuation of that war full of madness, carnage, and maledictions. What future awaits Ren at the end of his road…?

The Ditzy Demons Are in Love With Me
Ren’s virginity is in danger! His childhood friend Riria was frantically trying to pull down his pants and begging to touch his dick. The truth is that she’s actually a...

Rondo Duo – Yoake no Fortissimo
A rumor was circulating about an after-school devil. Its true identity was students whose forbidden impulse is awaken. “”From a best friend to a best friend””. The desire was infectious....

Which girl should I choose?
Natsuki Hayami is an ordinary college student who lives with his sister-in-law. Just when he was confused with his boring college life, he ran into Hinata, his teacher, he once...

Monster Girl Quest
Toro Toro Resistance presents a massive fantasy RPG adventure game! The story of being reverse-molested by sexy inhuman vixens! Sweet monster girls seduce and pleasure you! Lose and you will...

Hikari! Clover Rescue
In a not-so distant future, a powerful organization known as The Corporation is planning to take over the world by using the power of some mysterious amulets shaped like a...