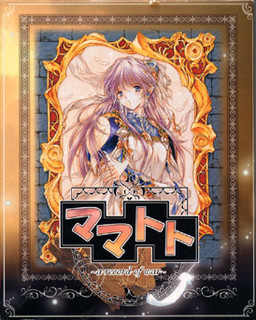 You (Nanasu) are the prince of Mamatoto. You go out and conquer other nations in order to conquer the world.

There is stability/stalemate, so none of the nations can actually take over the world because if they start a war with another country, a third one might have an advantage. Mamatoto is different it has zero territory to worry about. The problem is, it doesn’t have much of a population either. So you don’t really have an army, thus for many years, Mamatoto, the moving fortress, has been hiding in the monster lands.

You, Nanasu, who has studied magic really hard has recently invented magic to create these magical soldiers. These soldiers are made via cards which you can obtain via battles. So the more battles you fight, the more cards you collect, and the more troops you have in reserve. So now, Mamatoto, the fastest moving fortress in the world, started its move to conquer the world. Mamatoto’s goal isn’t to get territory – it’s to take out governments.

Installation:
1. Change locale to Japanese.
2. Extract the archive.
3. Run _inmm238/_inmmcnf.exe (Required for sound to work.)
4. Start the game with System39.exe

Wolf girl with you
On a full moon, you rescued a timid puppy, that is to say a puppy-human thing… indeed, she was a lupine. That night was the beginning of a wild and...

Taimanin Yukikaze 2 Animation
20XX A.D. Japan is plagued by evil spirits that dwell in the shadows. The only thing preventing chaos between spirits and humans is an implicit agreement to “live and let...

Detective Masochist 2
In the city of Kanazawa, our hero is still working tirelessly as a detective to live up to his mentor’s teachings. …But it would be tough to call him hardboiled....

Kunoichi Botan
One day, a kunoichi named Botan, along with her comrades are assembled by the village chief for an emergency meeting. Their master hadn’t returned from her mission. There was a...

Marina’s Cuckolding Report
Azuma Kenji is a married man with a wife and child. One day, he reads someone’s online account of their wife sleeping with another man, and it intrigues him. What...

This is a story about a guy and a girl. Their past and present. Both sad and happy moments of their life together. Take this chance to relax after a… [...]

Cyanotype Daydream -The Girl Who Dreamed the World-

Kaito wakes to find himself in a strange room with no memories of who he is or how he got there. The only other people around are a quiet white-haired… [...]