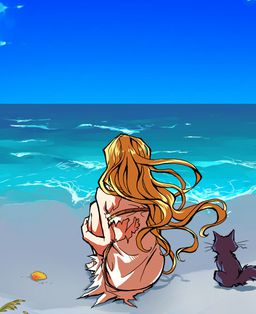 The game picks up directly after the end of the first game taking place on a mysterious Caribbean island where Heileen was shipwrecked with her friends. Heileen soon discovers a deck of tarot cards representative of the seven deadly sins and the seven heavenly virtues. The cards have the power to change both her dreams and her reality, and will help Heileen discover many hidden things from her past:
– How exactly did her parents die? Was it an accident, or not…?
– Who is Marcus?
– What role did Jack have in her life?
– And ultimately, what does she want to be? A saint, or a sinner?

The game features 15 unique endings and an enhanced version of the original quest system in Heileen with 20 quests.

Coμ -Black Dragon in a Gentle Kingdom-
“We are the team. Yes, it’s like a community….” There is a legend of a mysterious girl called “Girl A”...

World End Economica Episode 3
The conclusive episode in this visual novel trilogy is set in the far future on the moon. Will Hal’s dream...

Supipara Chapter 1
The protagonist, Sanada Yukinari, has returned to his hometown in Kanagawa Prefecture, Kamakura City, for the first time in seven...

Yukikoi Melt
It’s been only three months since Miharu moved to the snowy town of Yubane, where he was greeted with first...

Pretty Soldier Wars A.D. 2048
The apocalypse known as “The Third” occured as a result of mankind’s tasting the deadly fruit of nuclear technology. The...