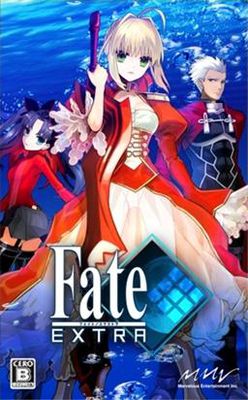 According to Nasu, Fate/EXTRA is a JRPG which takes place set in an alternate universe that split from the Fate/stay night timeline in the 1980s to 1990s.

The Story is set in the in a school called Tsukumihara Academy, a fictional place existing with an artificial environment called the Moon Cell. There, the Moon Cell orchestrates a replication of the Holy Grail War using a system called Serial Phantasm or SE.RA.PH, which handles the summoning of Servants. Servant data is taken from the Automaton (Moon Cell Automaton), a spiritual computer system built on the lunar surface by a pre-human civilization and discovered by humans in the year 2032.
The Automaton has monitored and recorded all occurrences on the Earth (including the activities of human heroes) since time immemorial. In this sense, it is similar to the Throne of Heroes, but it’s possible to summons beings which aren’t present in the Throne.

Each of the 128 participants in the war must duel the other Masters in a place called the Arena, where failure results in deletion from both the real and digital worlds. When only one remains, the “Holy Grail” shall grant the victor’s wish.

Reserve
You play the pink-haired heroine Mio, who just wants to go on a date with her boyfriend. However, she slips through a crack in timespace and finds herself in a...

Air
Kunisaki Yukito’s deceased mother left him with the doll and her last wish that Yukito look for the “girl in the skies” because it is his destiny to save her....

Sword x Hime
This game pursues the ultimate adult sex scene, the action is smooth and elegant, and the colorful light and shadow make the scenery particularly shiny and moving. The core element...

Beat Blades Haruka
Evil ninja have invaded Japan to try and conquer it with their devant ideals and revive the ancient creature that grants them power! And the only way to stop them–is...

Kuro no Tsuki – Darkness of the Moon
Kuro no Tsuki tells the story of two royal brothers, Roland and Altraud. A sudden change in the once-kind Roland brings about the downfall of their kingdom and a hurt...

Beach Bounce
A classic adult themed visual novel game following your exploits in your last summer holidays before you receive you university exam scores. A fun tongue in cheek story with multiple...