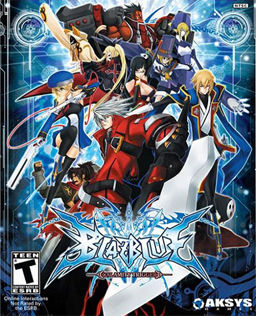 Prior to the events of BlazBlue, humanity was on the verge of extinction from the “Black Beast”, a creature of Darkness. The world was saved by six heroes who wielded magic. They helped humanity create “Ars Magus”, a fusion of magic and technology, to defeat the Beast.

After the war, the Novus Orbis Librarium (the Library or NOL for short) was created to govern the world with the use of Ars Magus. A great deal of dissent was caused by the Library, partly due to Ars Magus’ use in nearly every facet of society, and the widening socioeconomic gap between those who could and couldn’t use Ars Magus. This dissent would eventually form years later into The Ikaruga Civil War, when the Ikaruga Union openly rebelled against the Library. After the war, the Library imposed a harsher rule on the world, punishing any rebellion against the Library with the death penalty.

In December A.D. 2199, several years after the Ikaruga Civil War, a branch of the Library was utterly destroyed by an SS-class rebel named “Ragna the Bloodedge” also known as the “Grim Reaper”, in an attempt to destroy the entire Library. The Novus Orbis Librarium, hoping to stop him, immediately announced the largest bounty ever, available to anyone who could capture him. Interestingly, Ragna possesses a powerful form of Ars Magus known as the “Azure Grimoire” (Grimoire of the Blue in Japan), also known as the BlazBlue. This led the Librarium, as well as the Ikaruga Union and other fighters, to hunt Ragna not just for his bounty, but also his grimoire.

The Leisure of Grisaia