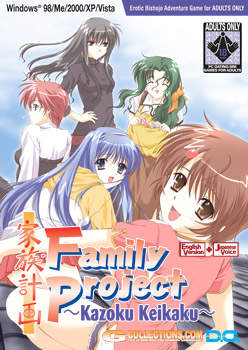 “What is family?” – This question lies at the heart of Family Project ~Kazoku Keikaku~, the newest game from G-Collections and one of the most reknowned titles in visual novel history. In it you portray Tsukasa, a fiercely independent youth who lost his parents at an early age and now spends his days working at a Chinese restaurant to make ends meet.
Reluctant to form interpersonal ties lest they be shattered, Tsukasa is nonetheless unable to abandon the illegal immigrant girl he finds collapsed in the alley behind his workplace one day. Confronted by her utter helplessness he takes her in, an encounter that opens the door to a new life – one where he faces the challenge and wonder of being no longer alone.
Tsukasa soon finds himself at the unwilling nexus of even more lives, attracting a band of misfits and social outcasts around him that swell beyond the confines of his small apartment. They find shelter in an abandoned house, where despite Tsukasa’s lingering doubts a pact is formed: the “family project”, an alliance of mutual convenience and utilitarian support that despite the mistrust and antagonism among its members soon comes to mean much more.
As Tsukasa you must navigate the ins and outs of your newfound family life, deciding for yourself what matters most, who to protect and defend and how best to shelter a fragile and precious love increasingly beset by outside forces. Moments of laughter, tears, and profound emotion mingle as you chart your own course toward the true meaning of “family”.

Kemonomichi -White Moment-
Large sword in hand, a man plans his escape from the organization. Running from his pursuers, he is forced to wander. Then, before his eyes… a girl appears. In the...

euphoria
Is this cage hell or paradise? They wake up in a white room remembering nothing―― The protagonist Takato Keisuke and 6 others are locked up in these hidden white rooms....

The Sagara Family
You are Yusuke, a Japanese youth about to enter college in Tokyo. When your father suggested that you live with the family of a friend of his while you attend...

Backstage Pass
The glamour and glitz of showbiz hold little appeal for Sian. As the daughter of a professional makeup artist, she knows how stressful and uncertain work can be, and she...

King of the Raft
Atlantis existed and the faction from our legends loved Earthlings. They departed, forgetting about Earth. A new faction sees our inferior species destroying the planet. They claim Earth as theirs,...