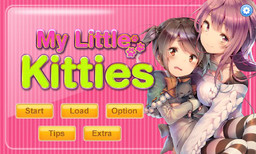 Hanul is a teenager having a weary day because all kinds of animals -including dogs, cats and even pigeons- are chasing him frantically.
One day, he discovers a mother cat and her kitten, which were living in the tree of his yard, lying dead still on a cold floor.
He took them to a veterinary clinic, but it was already too late for the mother cat. And on behalf of the deceased mother, he decided to take care of the kitten named Nuri.
But, the little kitten Nuri was not an ordinary kitten.
She was a mystical creature, an inhabitant of another world not recognized by ordninary people.
After a peculiar meeting with Sora, who has her own story with the supervisor of mystical creatures, Yura, the boy who became a father of two girls after many twist and turns
is now about to begin a new life with his new family.

3 Responses to “My Little Kitties”