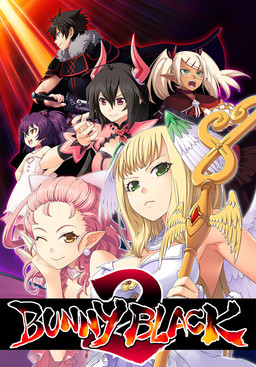 The adventurer Dachs had been bestowed great magical power and eternal life by the maou, and in return he serves as her underling. However, he was dragged into a revolt by the maou’s army and ended up becoming the new maou. He made the previous maou his wife and brought peace to the labyrinth known as the ‘maou’s forest’… but it was soon shattered by some unknown troops who quickly took over half of the forest. After he found out through captured warriors that they were under the command of a group of three women from the heavens, he gathers his troops to launch a counterattack at the angels’ base.

A Happy Valentine
The side story taking place after 40 Days and 40 nights of rain. It’s a special day, and Kyrie is trying to celebrate this special day for Yuu. See also:...

The video my wife was hiding… Ex-boyfriend cuckolding records
Having a beloved wife’s ex-boyfriend cuck her! To see her moaning face which her husband has never seen before… An AVG to see the wife’s hidden side that is a...

Milk Pot
Basically shows us one day in the life of a futanari girl and shows us various indecent acts she commits in order to temper her uncontrollable sexual urges. See also:...

Io [Christmas Eve]
One man. One woman. One little girl. And in their midst, a lot of the second movement of Beethoven’s 8th piano sonat See also: Snow Drop Nocturnal Illusion Kira Kira...

Eden’s Ritter: Paladins of Ecstasy
The kingdom of Ellerald, where stretch the roots of sacred Sephirot, is under attack by monsters that ravage the land and its people. The royal priestess Cecily sustains the hearts...

Bunny Black 2
The adventurer Dachs had been bestowed great magical power and eternal life by the maou, and in return he serves as her underling. However, he was dragged into a revolt...