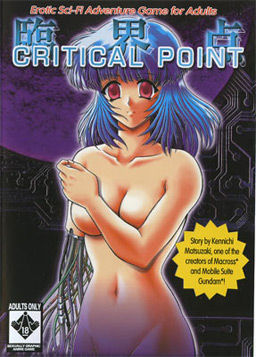 In the early 21st century, a sudden shortage of food and energy sparked World War III, a massive conflict that saw the deaths of millions and brought the population of Earth to 15% of its prewar level. Years later, an uneasy calm has descended on humanity, although a state of war still technically exists. Four power blocs that share control of the Moon and the earth, each looking for a weakness they can exploit against the others.

You are Captain Leiji Osumi of the Free Alliance Space Force, formerly a fighter pilot in the War. Your past is haunted by a terrible incident that caused you to change careers, transferring to the top secret intelligence division. When a series of technical problems on the Free Alliance Moon Base D-02 hint at sabotage, you are dispatched to get to the bottom of things, under the cover of “Technical Advisor.”

The military learned long ago that women are better adapted to lonely assignments in space, and so the base is staffed almost entirely by females. Arriving at the base, you discover that an inexplicable sexual insanity has gripped its normally professional staff, prompting further investigation. Are these strange occurrences connected with the sabotage somehow? You have to untangle the mystery and get things back on track before one of the other power blocs notices that anything is amiss and tries to attack.

NekoPara vol.0
What’s NEKOPARA? Why, it’s a cat paradise! This is a story just before Kashou opened “La Soleil”. The eldest daughter of the Minaduki household and their 6 catgirls go to...

NekoPara vol.1
What’s NEKOPARA? Why, it’s a cat paradise! Minaduki Kashou, the son of a long line of Japanese confection makers moved out to open his own shop “La Soleil” as a...

Bitchy Boss Bimbofication
She’s such a f*ckin bitch! …Well, at least, she was. Now with one word, I can turn that frosty elitist bitchy boss of mine into a vulgar and perverted gapefacey...

Shards Of Eradine
The myth that the Goddess could be resurrected had been whispered on the dying breath of Malami, the last Great Nymph trainer. His faith in her resurrection passed to Cosmo,...

UuultraC
A golden era of artists, actors, and heroes is shaken to its core when kaiju straight out of black & white cinema attack Japan! One couple falls victim to the...