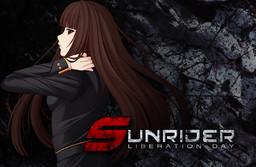 Following the devastating war between the democratic Solar Alliance and the tyrannical New Empire, the galaxy was split into two zones separated by the Neutral Rim, a buffer between the two states.

Weakened by war, the New Empire collapsed from within in the Compact Revolution. A figure known only as VENICZAR ARCADIUS led the people against their Imperial oppressors. Following the New Empire’s fall, Arcadius mysteriously vanished from public view.

Soon after, another entity claiming to be Arcadius returned and declared the formation of PACT. With the vast production base of the former New Empire, PACT invaded the Neutral Rim with the intent of striking the Solar Alliance.

Arcadius sought the hand of the Ryuvian princess for reasons unknown, but was thwarted by Captain Shields of the Cera Space Force.

He was further thwarted at the battle of Far Port, when Cullen’s blunder lead to the destruction of the PACT invasion fleet by a much smaller Alliance vanguard fleet.

What was envisioned by PACT leaders as a glorious invasion into the heart of Alliance space instead became a bloody foreign campaign fought in the undeveloped Neutral Rim.

With the Alliance Fleet approaching PACT space and their initial military goals now in tatters, VENICZAR FONTANA betrayed Arcadius in the Battle of Helion and took control of PACT.

Now unmasked, the truth of the entity claiming to be Veniczar Arcadius came to light…

Next Knight Kuon’s Chroncicles of Debauchery
If Kuon the knight uses her “power”,captured princess Tia becomes obscene!? But if Kuon is defeated bad things happen too! Can Kuon rescue the princess without using her power? This...

Heileen
Heileen is a cute 18 year old English girl. She lives a quiet life, without any real problems. But one day her uncle Otto, a famous English merchant, decides that...

Welcome to Pussy Paradise
Full throttle desire! Your very own sex-crazy theme park. You’re a fertile man in a land of mostly women. As such, you’ve been granted a free pass to a certain...

Tokyo Onmyoji -The Tale of Rei Tengenjibashi-
It is the year 2014 in the Shinjuku ward of Tokyo, Japan. The capital, having remained largely unscathed by major air raids for the duration of World War II, has...