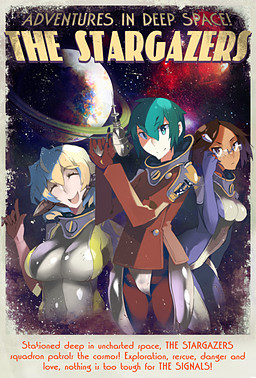 Stargazers Squadron. A group of 3 pilots stationed in deep space on the outer rim of one of the arms of the Milky Way Galaxy. The Signals are always first on the scene! It’s the role of the Signals to be the spearhead into every new operation, laying the ground work for future missions.

By now humans have explored much of the inner Milky Way galaxy but not much of it’s outer reaches. Their mission is to patrol along an uncharted rim of the Milky Way Galaxy, to chart, explore, establish telecommunications, and a foothold between the outer galaxy and the inner galaxy. Not much happens in this reigon of space, but when the Stargazers are nearby it doesn’t take long for them to find some trouble!

Tags: Female Protagonist, future, Heroine with Catsuit, Science Fiction, Spaceship, Yuri
« Saved a bullied girl and she embraced me
The Shadows of Pygmalion »

30 Responses to “The Stargazers”