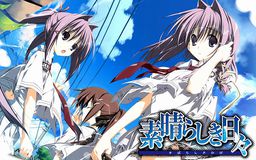 Subarashiki Hibi is a story told in seven chapters. The story follows a group of several Tokyo high school students mostly through July of 2012 and each chapter is told from the perspective of one of its five main characters. Because of the same timeframe coverage, certain events are overlapping from chapter to chapter but at the core of it all is a mystery revolving around the prophecy about the end of the world on July the 20th as well as the events that are following before the said date. The first part of the VN is used to make a setting for the said mysteries while the second part is about uncovering the truth behind them all.

The story begins in chapter #1, ‘Down the Rabbit-Hole I” on July 12, 2012. The protagonist, Minakami Yuki, lives a peaceful everyday life with Tsukasa and Kagami, her childhood friends, when one day she meets a mysterious girl, Takashima Zakuro (a girl in another class in Yuki’s school, who seems to have met Yuki before but Yuki doesn’t remember her). The strange schoolmate Yuki just befriended moves into her house (Yuki doesn’t mind too much about that). Then following this new guest in Minakami’s residence, Yuki’s two childhood friends mentioned earlier also move in, just so that they don’t feel left out. These events are just a prelude for what will ultimately lead Yuki to discover her own “Wonderful Everyday” during this chapter.

SubaHibiDoggy.rar – 1.6 MB
“Uncensored” version above is missing one CG that was removed from English release for legal reasons (I won’t get into graphic details). Since so many people keep asking about it, here’s a patch that restores it – Just extract files to main game folder.

Will: A Wonderful World