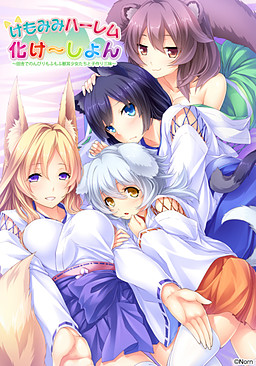 Wild Romance: Mofu Mofu Edition is the story of Kazuma as he returns from an unhappy life in Tokyo to his hometown in the Japanese countryside where he reconnects with four female classmates. When the girls accidentally reveal that they are not mere humans but actually magical animal spirits in human form, a journey of discovery begins. Expanding on the original version this now includes a variety of sexual experiences as Kazuma initiates each of the four female protagonists into womanhood.

Sumire is the fox and leader of the pack. She has a motherly instinct and a deep desire for physical contact. Tsubaki is the cat and second in command. She knows what she wants and she’s determined to get it. Aoi is the dog and the youngest of the four. She’s obedient, full of energy and always wanting to please her male companion. The final girl, Nazuna is the tanuki or Japanese raccoon. She’s smart with a seductively creative mind but also a bit of a troublemaker.

Amorous Professor Cherry
I’m Kouta Koikawa, and I’m having a problem with my studies. It’s not that my classmates’ ruckus bothers me, I...

Osananajimi wa Daitouryou
It started out as an ordinary morning, woken up by my childhood friend. Had a good breakfast… complete with morning...

Fantasy Tavern Sextet Vol. 3: Postlude days
Much time has passed since our hero, the chef at an Akihabara maid cafe, got transported to another world. One...

Eiyu*Senki Gold
This is an alternative version of Eiyuu*Senki, with a new storyline. It takes over its cast while adding additional heroines...