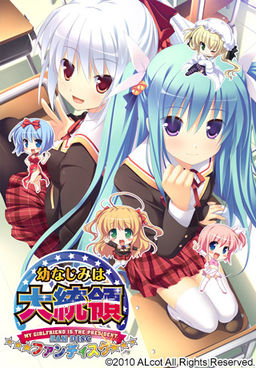 Welcome back to the White House! All your favorite characters are waiting, like President Ohama, Irina Putina, and the adorable spaceship girl Ell! The official fandisc (short sequel) to the popular visual novel “My Girlfriend is the President“!

“If you have sex that much, your brain will turn to mush. What’s that? N- No, Im not jealous or anything! Dont be stupid!”

Meanwhile, Qoo wants to see Ell and Junichiro have kids, so shes been hatching some devious plots to get them to hook up even more. Don’t worry, its nothing you wont enjoy! [Insert evil laugh here…]

Just then, a rumor starts spreading about a female ghost thats been appearing in town. The funny thing is, the ghost looks just like Ell…

IRINA SIDE:
Irina Putina returns to Japan after many months, eager for some quality romantic time with Junichiro. Unfortunately its not going to be that simple.

A faction in the Japanese government is plotting to get Junichiro and President Yukino together, so they arrange for Junichiro to live with both Yukino and Irina, allowing both girls to compete for his love… and his hormones.

In one corner is Yukino, childhood friend, good at housework (though terrible at cooking), willing to let Junichiro do anything he wants. In the other, the alluring Irina, with her sexy body and large breasts.

In the mood for some “double maid play” with manage-a-trois? The love battle is about to begin!

This is the official “fan disc” (short sequel) to My Girlfriend is the President, which is approximately half the size of the original game, with two complete routes and many sex scenes to explore and is uncensored.

74 comments on “My Girlfriend is the President Fan Disc”

Canvas 2
The series focuses on the lives of some students and teachers at Nadesico Academy both at school and their private lives. The main character of the series is Kamikura Hiroki,...

Loca Love: My Cute Roommate
Aoi Ichitaro had been living on his own, until disaster strikes at his apartment and he’s temporarily evicted. However, his misfortune turns out to be a blessing in disguise… “Y-You’re…...

Theory of Fear
“Theory of Fear” is a visual novel combining “slice of life” and “dark fantasy” genres. In the daytime, the main heroine is an ordinary girl, a first-year university student, who...

Anaheim Girl’s Love Story
This story takes place in a company, called ‘Anaheim Electronics’.It is a love story about the people of OL.The heroine without any experience in love,’Saotome Rinne’.This is her first time...

Sakura Sadist
Music student Azusa is completely obsessed with the campus queen, Matsubara Mamiko, and for good reason. Mamiko is beautiful, intelligent, compassionate… and completely out of Azusa’s league! Azusa has long...