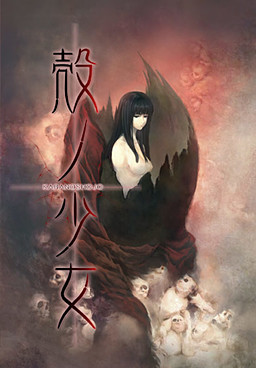 “I want you to look for something. Me. My true self.”

Meanwhile, a series of bizarre murders is plaguing the area, one where young women are disappearing, only to turn up dead and maimed with their wombs torn out. Seeking assistance on the case, Detective Uozumi Kyozo called up his old friend and former coworker, Reiji.

Ouba Girls Academy, a school on the outskirts of Hoya City. Reiji’s little sister attends this school, where two young women have mysteriously vanished. Saeki Tokio, the vice-principal, calls in Reiji to investigate their disappearance, giving him his third case.

Reiji infiltrates the academy as a substitute teacher to glean information from the students – but that’s when he meets her once again.

Kuchiki Toko – his first client, the girl who asked him to search for her true self. Her manner is distinctly boyish as she remarks:

The body count continues to rise. What should be a simple search for some students is starting to grow out of control. For some reason, the number of missing people and unidentified bodies don’t match up.

Who will be chosen as the next victim?

As the endless cycle of tragedy continues, what mysteries lie behind these new cases? Behind a similar series of murders from six years ago?

This is HD remake of Kara no Shoujo

-“The game looks blurry in fullscreen mode [critical] – To fix that, change desktop resolution to 1280×720 and check free aspect ratio in the game options.”
-“Opening doesn’t play after prologue [critical] – If you have LAV Filters installed, try resetting settings or uninstalling it. This can be the reason.”
-“Takashiro hospital becomes Takanari after loading save file with map section [minor] – No solution”
-“Screen is not fully dimmed, when “end investigation” dialog appears [minor] – No solution”
-“Some very long sentences are splitted [not a bug] – Making a font even smaller is not an option. Using 4 lines with current size won’t be enough and will look ugly
I suggest you checking voice continues after advancing in the game options.”

Steins;Gate ( JAST )
The story of Steins;Gate takes place in Akihabara and is about a group of friends who have customized their microwave into a device that can send text messages to the...

Sexorcist Academy
Demon slayers are the ones who keep the world safe from supernatural threats, but their school is limited to women! That is, until our hero becomes the first-ever male student...

The Melody of Grisaia
A side story for The Labyrinth of Grisaia, this episode takes place just after Kusakabe Asako officially names Kazami Yuuji her successor as number 9029, and details his globe-hopping exploits...

Hashihime of Old Book Town
Jinbochou, Tokyo June 1922, Taisho Era The Rainy Season Tamamori came to Tokyo with his sights set on getting accepted to the Imperial University. However, he doesn’t pass the entrance...

Silver Chaos
The story of Silver Chaos is set in an hypothetical fantasy role-playing game world, which once was menaced by a cruel demonic entity called Hadeus. The terrible war which followed...