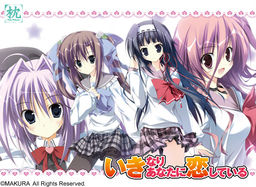 High-spirited Tane, bitter smiling Eika, cold gazing Ryou and new resident Tsumugu. How did Chouji’s normal life suddenly become like the Palace of Versailles? The story is constructed like a slice-of-life light novel, albeit with lots of ichaicha since there’s four heroines who are already at max affection with him.

Sweet Fantasy
Young and pretty nymph Pumpkin fell in love with her mistress. Unfortunately it’s one-sided love and that is why desperate Pumpkin decides to use charm magic on her. The heroine...

Suck my Dick or Die!
The anti-government guerrillas were fighting against the government in the country which was politically unrest. There was an incident that a little girl was raped and murdered by the guerrillas...

King of the Raft
Atlantis existed and the faction from our legends loved Earthlings. They departed, forgetting about Earth. A new faction sees our inferior species destroying the planet. They claim Earth as theirs,...

Love Witches
Sexual story about a small tentacle and two charming witches. History is told from the face of a tentacle, who has to survive in a world hostile to him. But...

A summer promise to forever
Jiajun Lin, a high school student and the hero of this story. He came to a village named Tangxia because of the request from his father, who was the principal...