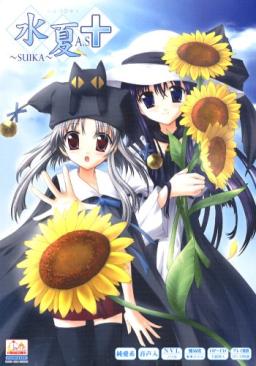 The Tokiwa village is surrounded by the ocean and the mountains.
Tokiwa, “never changing”, the village was named. Even in this “never changing” village, the season is changing to summer.
When the “no-name” girl ran through the village while ringing the little bell on her hat, the red strings of fate entangled……

Hiroshi Inaba left home because he didn’t want to be tied down with the old family tradition. When he heard his father has become seriously ill, he came back to his home village, Tokiwa village, on the star festival night. That’s when he met the mysterious girl who was holding a black stuffed animal cat.

Wearing black clothes and a black hat, the girl didn’t remember her own name. However, as he spends more time with the girl and her stuffed animal cat, Archimedes who could understand what people are saying, her identity starts to become more clear. The special summer for Hiroshi has just begun.

The Flower Shop: Winter in Fairbrook
The heroine, Natalie, is a college freshman who desperately needs a job for winter break. Thankfully, her roommate, Clara, knows a certain flower shop that could really use an extra...

Return to Paradise Heights
The Paradise Heights apartment has changed after half of your uncle’s company got liquidated. After the money went, so did some of the tenants. Now Keigo Nakadai (protagonist) works for...

The Eden of Grisaia (Unrated Edition)
He thought life at the academy would never change. Everyone marched forward in the same direction, matching step for step; before he knew it, he began to surrender to that...

Wanting Wings: Her and Her Romance!
At Seiyou Girls’, an all-girls boarding school, there are rumors of an angel. Our story begins in the second term, just before Christmas. Hina, Rin, and Fumi: three girls that...

Koi iro Chu! Lips
Haruka is just your average high school student idly coasting through his life. His mornings generally start with a delivery from his childhood friend and neighbor Mirai, who has an...