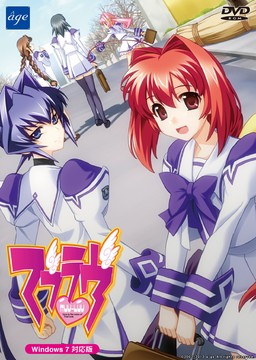 Shirogane Takeru is a typical high school student with a lazy attitude and a love for the virtual reality mecha battle game Valgern-on. Even though he didn’t really wanted it, he is popular in school mainly due to his daily fights with his osananajimi (Sumika) attracting too much attention. His life takes an unexpected turn when he finds a girl (Meiya) he doesn’t remember ever meeting in his bed one morning. Whom later revealed to be the heiress of one of the biggest zaibatsu. She immediately moves to his house and starts changing his life for the good with her one-track-mind and unlimited resources…

One day Takeru wakes up late, wondering why Sumika or Meiya didn’t wake him up this morning. Not seeing any signs of them he gets a bit worried and goes out of his house to only see the town he lived all his life in ruins. After getting past the initial shock he decides that this must be a dream and decides to enjoy it as much as he can…

Note: This is 2016 re-release, with “Director’s Cut” patch (restoring 18+ content that wasn’t present in Steam release). Compared to previously fantranslated version, it features additional content from PS3 version of the game, higher resolution and improved compatibility with modern systems.

No One But You

Quartett!
On the 17th of March, there is a classical strings concert unlike any other in the world. Ninety-six young musicians,...

Last Evil
Humanity has sealed the great demon away. Sealed away deep in the earth, hidden in a maze of sewers. What...

Zero Escape: The Nonary Games
Kidnapped and taken to an unfamiliar location, nine people find themselves forced to participate in a diabolical Nonary Game by...

My Butler
When your aunt asks you to work part-time for her talent agency, you didn’t expect to be asked to live...