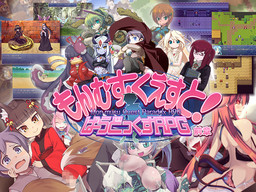 Lose and be ravished by the vamps!
Battles sexy enchantresses, where failure ends in reverse rape!
Party members are also monster girls who wildly fuck the hero!
There’s never a scene where the hero’s in charge…

An adventuring role-playing game in a fantasy world!
The protagonist is a beginner hero.
Following in the footsteps of his hero father, he sets off for glory!
Where will the adventure take him? When at last his journey ends,
will he have achieved his dream?