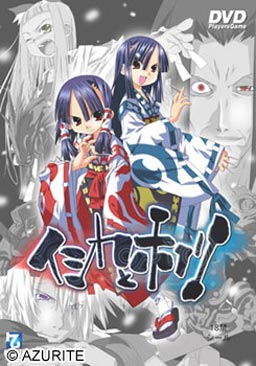 You are Araka, a Dispatch Coordinator for the Paranormal Defense Force (PDF). You support PDF agents Ishika and Honori, twin priestesses with tons of shamanistic talent and an even larger penchant for trouble.

Together Ishika and Honori are as cute as they are clumsy. Ishika is far too sweet a girl to ever effectively use her stupendous skills at spell-casting. While super strong Honori jumps blindly into battle before ever knowing what she’s getting herself into.

Help Ishika and Honori regain the totem spirit creatures that fuel their psychic powers and defeat the masters of paranormal evil!

Heileen 2
The game picks up directly after the end of the first game taking place on a mysterious Caribbean island where Heileen was shipwrecked with her friends. Heileen soon discovers a...

Serment – Contract with a Devil
A Visual Novel – Dungeon Crawler hybrid where you play as 1 of the 4 young and beautiful girls who recently died but is brought back to life by a...

Mosaique Neko Waifus 2
How have you been? Crazy times we live in huh? Luckily you know just the right Neko girls! Care to recite some poetry with Sara? Or eat cookies with Niko?...

Memory’s Dogma CODE:01
A neuroscience × genetics × near-future sci-fi visual novel adventure game. In 2030, due to Japan’s advancements in neuroscience, memories can now be saved and recorded. This is called e-Memory....

Little Busters! (STEAM)
Capturing the hearts of countless fans since 2007, Little Busters! is an emotional visual novel from Key, the minds behind Angel Beats! and CLANNAD. This special English release supports touch...