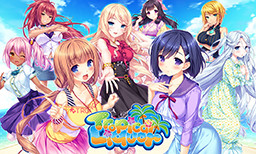 “But onii-chan, you’re just some part-time bum, aren’t you? On top of that, your age equals the years you’ve never had a girlfriend, right?”

The player (that’s you!) is a part-timer who lives an uneventful, boring life.

One day, you win the prize draw at the shopping district. The prize: a trip to an island in the south — you decide to take a 30-day vacation.

“I… want to make this a nice vacation…! I want to change myself in this trip!”

You decide to grow out of your dull, boring life and get a girlfriend.

“To get a girlfriend, you have to first get close with a girl! If you don’t create a bond with one, then nothing will ever happen!”

On your vacation, you meet all sorts of girls, each of whom has something troubling them. You can talk with them, share a drink with them, and go on a date with them.

“Let’s make this a nice vacation.”

In this vacation, will you finally come out of your shell, and manage to make a girlfriend?

My Girlfriend is the President Fan Disc

Your Waifu Foxgirl Konko
One day, you meet with a trainee foxgirl, who’s in charge of the school club you’re assigned to. The girl, Konko, has no human friends. By hanging out, playing, drinking...

Mirai no Kimi to, Subete no Uta ni
One day in December, the protagonist finds a girl sleeping in the street. But he soon finds she’s actually a musical android named Miku. See also: Rin ga Utau, Mirai...

Sono Hanabira ni Kuchizuke o 4: Itoshisa no Photograph
A love comedy about two very sexy and loving lesbians living together. Kaede and Sara are one of the school’s official couples. The girls are all over each other, both...

Split Of Knight
The Seguria continent, a world with a scattering of towns and dungeons… There is a village called Each in the continent, where there lived a girl named Rose. She was...

Last Evil
Humanity has sealed the great demon away. Sealed away deep in the earth, hidden in a maze of sewers. What few demons remain are scattered, slaughtered like game animals in...