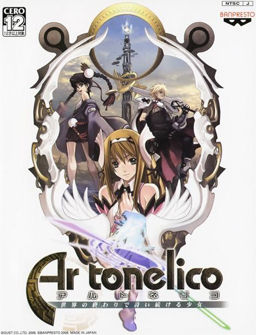 Ar tonelico takes in the region of Sol Ciel, upon a huge tower that rises above a sea of deadly plasma that swallowed the surface world in a disaster centuries past. This is where the series gets its name: Ar tonelico is the name of that tower. As well as humans, the tower is home to a race of human-like artificial beings named Reyvateils, who can communicate with the tower by singing songs to cast magic.

The story starts in the city of Platina, during an outbreak of enemy creatures called Viruses. The protagonist, a Knight of Elemia named Lyner Barsett, goes to investigate with fellow knight Ayatane, and the tower administrator, Shurelia. Unfortunately, they rapidly discover that the Viruses are able to turn intangible, rendering normal defeat impossible. Shurelia therefore sends Lyner on a quest for the only thing that can help them: the Hymn Crystal Purger. Taking an airship, he travels down to the Wings of Horus, the floating continent that surrounds the tower. More accurately, he crashes thanks to an attack from a dragon, which complicates matters extremely.

In the process of searching for the crystal and a way to repair his airship, he meets and teams up with a number of people, including two Reyvateils. First is the shy Aurica, who healed his injuries after his crash. Second is the more outspoken Misha, actually his forgotten childhood friend. But there’s one problem – Misha looks much younger than she should be. Aside from those two are the wanderer Jack, the local church knight Radolf, and the airship grathmelder Krusche. As the story progresses, Lyner and his comrades not only try to find the Hymn Crystal and fix Lyner’s airship, but discover the reason for Misha’s youthful appearance, and the source of the recent Virus outbreak.

The Melody of Grisaia

Bikini Tits
Summer break is finally here! At least, it was until my plans got ripped out from under me… You see, now I have to lend a hand at my grandpa’s...

Bloody Bride
You play as a young vampire who has reached (vampire) adulthood. He is sent to earth to suck the blood of a girl with a ‘platium aura’. However the girl...

Silver Chaos
The story of Silver Chaos is set in an hypothetical fantasy role-playing game world, which once was menaced by a cruel demonic entity called Hadeus. The terrible war which followed...

Yandere
This is a kill or be killed brutal and deadly love story. Can you stay alive all the way to the ending? The girls are all violently possessive and go...

Higurashi When They Cry Hou Ch.6 Tsumihoroboshi
June, 1983. The summer heat has arrived earlier than it does most years. By day there are cicadas, and by night, the higurashi. Hinamizawa, a small village in the Japanese...