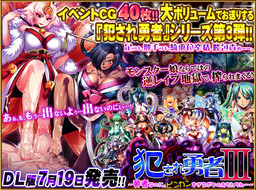 The Empress suddenly assigned you to put down the strong monster, Kyubi (fox of the nine tails). Being a fresh exorcist, you tries hard to meet the expectation; however, dreadful yet sensual monster girls take advantage of your lack of experience and assault you sexually without a break!
Can you defeat the powerful monsters to save the world? Or your mission fails and you go to the heaven in ecstasy?