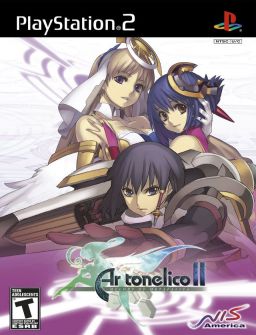 Taking place in the desolate land of Metafalss, a tiny continent built upon the rim of a tower much like the first game’s Ar tonelico, it revolves around two opposed factions: the ruling Grand Bell, which has recently declared war against the Goddess Frelia; and the Sacred Army, who believe that the Goddess enables Metafalss to exist. This ire against the Goddess stems from a failure centuries past at creating Metafalica, a paradise-like land spoken of in legend, which was interrupted by a vicious attack by her defenders. In addition to civil war, Metafalss is ravaged by outbreaks of I.P.D, a Reyvateil-specific disease which causes the victim to execute song magic uncontrollably and do much damage to herself and her surroundings.

Protagonist Croix Bartel, a knight of the Grand Bell, is regularly tasked with stopping the harm done by those afflicted. It is while on a mission to contain one such outbreak that Croix, together with his adopted sister Cocona, is put in quite a different situation. The Holy Maiden Cloche, the Reyvateil who leads the Grand Bell in the war, has come under attack by the Sacred Army. He is soon entrusted with protecting her while they escape. While attempting to hide from the Sacred Army, they encounter Luca, another Reyvateil who has known Croix since childhood.

Croix is soon to discover that neither the Grand Bell nor the Sacred Army are what they seem- and nor are Cloche or Luca. Unable to trust anyone except each other (and sometimes not even that), he and his companions struggle along their own path to thwart those who would manipulate them, discover the truth about the Goddess Frelia, and achieve the seven hundred year old dream of Metafalica.

The Melody of Grisaia

The Bell Chimes For Gold
The heroine, Maria is a skilled herbalist. She saved up money in order to get married with her master, but he ended up using the money to marry another woman,...

Little My Maid
You are Ouji Kamogawa, age 19, a bright student with a bright future. However, your dreams of going to a top-ranked university suddenly come crashing down when you fail your...

Fashioning Little Miss Lonesome
Ema Tachibana is a tall, gloomy and unsociable girl with a bad case of resting bitch-face. With all that working against her, she’s never really had any friends. At school,...

Love and Order
In the smallest district of Montreal, the Crown Attorney relies on the legal expertise of its lawyers; backed up by the support of a single hard-working secretary. This is the...

Lilycle Rainbow Stage!!!
Yuno loves Tamaki’s smile, and wants to her witness her dreams coming true…. though having not seen much of Tamaki lately, Yuno’s been feeling somewhat down. She depends on Saeka...