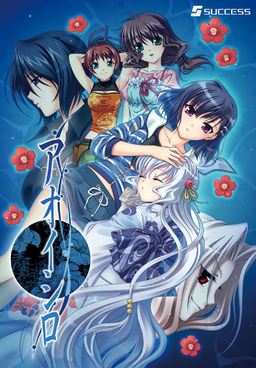 My deceased grandmother liked traveling. Strange scenery. Strange people. She liked to meet them. I am now a high school student and set off on a trip as well. It is just a camp for training of my club. We visit a town near the sea and go to a temple gate located at the cape. What we see there is….
Aoishiro is an all-ages, yuri visual novel developed by Success. It is considered somewhat of a sequel to Akaiito, also, a yuri visual novel by Success, and the two seem to share the same world. The original release of the game was for Playstation 2 on May of 2008. In November of 2009, the game was ported to PC. Modifications included high-res, less-censored CG. In addition, there were some extra CG and two extra side stories were added. There is also a mode where you can design your own Aoishiro scenes using a proprietary scripting language.

aoishiro_pc_eng_patch.zip – 22.4 MB
1) Download the patch and unpack it.
2) Save a copy of the original SCRIPT.AFS and EXE_CEL.AFS so it will be easy to revert back to the original Japanese text and menus.
3) If you have already played the game in Japanese, any save locations not at decision points will most likely crash. Save a copy of the settings directory to preserve your old save files. The default location is: C:\Documents and Settings\<username>\My Documents\Aoishiro
4) Copy the exe files to the folder where Aoishiro is installed.
5) Copy the files SCRIPT.AFS and EXE_CEL.AFS to the SCRIPT folder located under the directory where Aoishiro is installed.( By default, the install directory is C:\Program Files\Aoishiro )
6) Run Aoishiro_eng.exe to start the game or AoUtil_eng.exe to run the config utility.