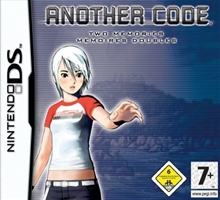 The game’s protagonist is Ashley Mizuki Robbins, a 13 year old girl who has been raised by her aunt, Jessica, because her parents vanished when she was three years old. She believed that they were dead, but two days before her fourteenth birthday, she received a package. Inside, was a letter from her father and a small machine. The letter said that he would be waiting on Blood Edward Island, an island located off the coast of Washington in the United States. The next day, the day before her birthday, Jessica and Ashley ride over to Blood Edward Island on a boat, but Ashley’s father isn’t there to greet them. Jessica goes to look for him, but when she doesn’t return, Ashley ventures out to search for both of them. While exploring the island, Ashley also befriends “D”, a ghost who has lost his memories. Together they enter the Edward Mansion, each looking for answers to their own questions.

Jake Hunter Detective Story: Memories of the Past

3 comments on “Another Code: Two Memories”

Deathtopia
Seiji is a teacher at the West Star Academy with a secret agenda – to take revenge on a female teacher Ruriko for some slight she did to him. Natheless,...

Rance 3: Fall of Leazas
Rance is asked to help stop an invading force aided by demons from taking over the kingdom of Leazas. See also: Rance 4.1 Rance: Quest for Hikari Rance 2: The...

Beat Blades Haruka
Evil ninja have invaded Japan to try and conquer it with their devant ideals and revive the ancient creature that grants them power! And the only way to stop them–is...

I Become the Dog in an All Female Household
Yuuki Shimazaki finds himself in the care of an all female household after his parents die. They all seemed so kind at first, but something perversely changes. He can’t help...

LIP! Lewd Idol Project Vol. 1
Kairi is a young and cheerful girl with a dream… Becoming the best and most popular Idol ever! She recently moved to Akihabara in order to achieve this, but she’s...