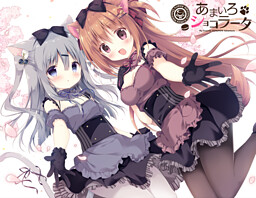 Yuzuki came to the town of Yuunagi as the leaves were starting to change colour. The first person he met was a cute cat-eared waitress, who was handing out pamphlets on the street.

When he was led into the cafe by the waitress Chieri, the other girls there also had animal ears. Seeing his wondering look, they worriedly asked him:

“Could it be… that you could see these ears?”

They explained that they were actually hybrid beasts whose ears and tails cannot be seen by normal humans. After learning about their secret, he started working at the cafe with them, while being both shocked and impressed at the differences between them and humans.

Koi to Senkyo to Chocolate