A Sky Full of Stars 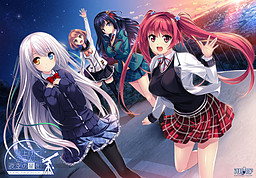 When Akito was small, he would gaze at the stars every night with his childhood friends Hikari and Saya. He felt excited seeing the twinkles of countless stars through the telescope lens, so close that it felt like he could reach out and grab them with his hand. It inspired dreams of journeys into space, exploring the Milky Way and solving the mysteries of the galaxy. However, now he no longer looks up at the night sky and was called the ‘astronomy club member who doesn’t watch the stars’.

He received an invitation to attend the revival of the ‘Pleiades meeting’ with astronomy clubs from other schools in the area and decided to go to their next meeting to turn it down in person. There, he had an unexpected reunion with Hikari, whom he hadn’t seen since she moved some place far away. Together with Saya, senpai Orihime and kouhai Korona, his long-lost desire to look up at the stars has been rekindled and their star-filled youthful days full of new precious memories begin.

40 Responses to “A Sky Full of Stars”