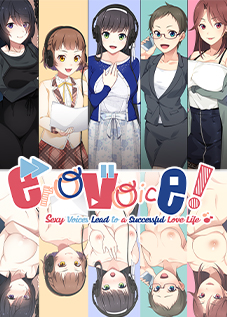 That was my life until I happened to discover an ad for a “General Affairs” position at a voice acting agency while searching for a job.

I leapt on the offer and landed an interview with that tiny voice acting agency, Cuckoo Clock, which manages voice actresses who performed mainly in adult entertainment.

There was a melancholy recording engineer with huge boobs who holed herself up in the studio.

There was a manager who looked like an intellectual, but was actually a dumb sportswoman.

And then there was our boss, a messy yet beautiful and open-minded woman who also worked as a veteran voice actress.

This was the start of my new life surrounded by such quirky coworkers.
Though after joining Cuckoo Clock out of love, I’m going to do my best to support our voice actresses!

Ninki Seiyuu: How to Make a Pop Voice Actress

The Voluptuous DEMON QUEEN and our Shoebox Apartment Life

The video my wife was hiding… Ex-boyfriend cuckolding records
Having a beloved wife’s ex-boyfriend cuck her! To see her moaning face which her husband has never seen before… An AVG to see the wife’s hidden side that is a...

Shoujo Dominance
Love blooms as Reina goes searching for the right person, only to find out that love has always been nearby. When her friends ask, “What kind of person is your...

Root Letter
√Letter is set in Matsue, Shimane Prefecture, where the protagonist arrives in search of Fumino Aya, a pen pal friend from high school who had disappeared for 15 years. After...

Sweet Pool
After recovering from a serious illness, Sakiyama Youji hoped that things would finally get back to normal. But shortly upon returning to school, his world begins to change—and no one...