A Kiss For The Petals: The New Generation! 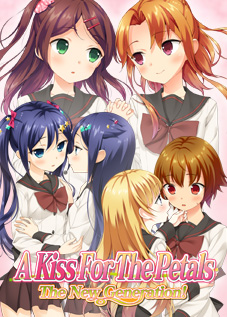 At the Saint Michael Girls’ School… festivities erupted among the girls of the annex. The reason for their celebration is the Best Couples poll being held at the main campus. The students at the annex, who look up to the girls from the main campus, decided, “Let’s have our own Best Couples!”
…It was always inevitable.
And so, the fairest and most intimate couples were nominated…

The first couple is a pair of childhood friends, Misawa Nagisa and Takahata Rina. The second couple is a pair of twin sisters, Kimishima Ai and her younger sister Aya. And finally… The transfer student who saw this whole thing as no concern of hers, Onohara Hazuki, is shocked to hear that she too, was chosen to be among the Best Couples.

Moreover, her partner is the sheltered young debutante, Suoh Manami. Actually, Hazuki has secretly been crushing on the impeccable Manami… But the truth is, they’re far from a couple, and while their classmates may cheer them on, it’s all in vain.

But then… Hazuki works up all her courage to ask Manami to become a “Best Couple” with her, and…

A Kiss for the Petals – Maidens of Michael

A Kiss For The Petals – Remembering How We Met

55 Responses to “A Kiss For The Petals: The New Generation!”