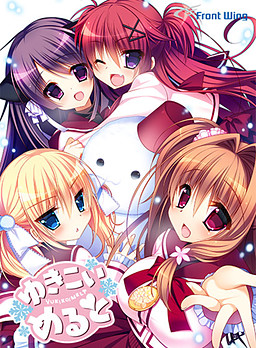 It’s been only three months since Miharu moved to the snowy town of Yubane, where he was greeted with first true taste of winter. Since he’s sensitive to cold, he greatly hates winter and patiently waits for spring like a hibernating bear. However, he was unfortunately targeted by the school’s top weirdo Usagi. She wanted him to join the mysterious ‘Winter Club’. It was a club to enjoy and love winter.

There were four members: his classmate Taruhi who’s also not good with the cold weather, the ultimate trouble maker ‘Hurricane’ Kanon, everyone’s onee-san (and heater) Shizuri, and the winter-loving aptly-named Yuki. They invited him to join them at the club’s exclusive dormitory, the former ryokan Tougenkyou. They continued to invite him no matter how many times he refused, so he asked them why they wanted him to join so much.

“Because it’ll be much more fun with you.”