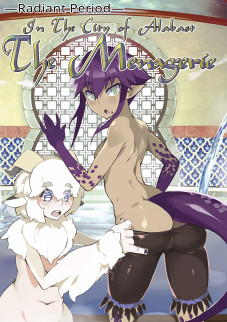 In the desert city of Alabast, there exists a massive structure referred to as ‘The Sail’, which separates the nobles from the lowly commoners. In this ivory tower however, there are secrets the nobles keep even from each other. Deep below The Sail, there exists a collection of sorts called ‘The Menagerie’. Obsessed by novelty, the elves of Alabast even go as far as to collect exotic artifacts, creatures and even other peoples from across the world. Here there is nothing and no one on display without a price.

The Menagerie is a new visual novel from Lupiesoft and features multiple character routes, adult content, monster girls and more!

42 comments on “The Menagerie”

Lilipalace
There is a place that appears like a mirage. Disappearing and reappearing over and over again. In this place, people have been disappearing. Seria, a knight of the kingdom, has...

Leaves
The protagonist and his childhood friends awake one day to realize that the world is not their own… See also: Unhack Quartett! Yume Miru Kusuri – A Drug That Makes...

Backstage Pass
The glamour and glitz of showbiz hold little appeal for Sian. As the daughter of a professional makeup artist, she knows how stressful and uncertain work can be, and she...

The Bridegroom Training Diary of Tsumugi-sama
Written by the writer of the Nurse no Obenkyou series, centering around one of its heroines, Tsumugi, after she won a popularity poll. See also: Island Diary Hypno-training My Mother...