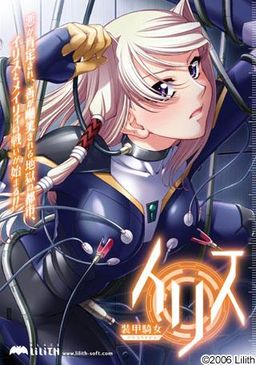 People moved in space, public order and security was maintained by the space federal managed by various species including human beings. The lead character Iris and her partner Meiry are the ace pilots of the 101 special unit, belonged to the federal army SSF.

Elaborated sex story of girls imprisoned in a whorehouse!

Iris is captured by a blackbirder in the middle of fierce battle, and taken to a city Mirion ruled by the enemy forces. She is forced to have a devil’s collar around her neck which blows up if she attempts to escape, and have sex with men as a whore.

Choose a guest from various kinds of characters: human beings, sub human being, and monster!

Libra of the Vampire Princess: Lycoris & Aoi in “The Promise” PLUS Iris in “Homeworld”

Steam Prison
There are two kinds of people: the rulers and the ruled. The Heights are a gorgeous utopia. The Depths, a filthy industrial wasteland. Our heroine, a Rank One police officer,...

Kara no Shoujo
The year is 1956; a series of bizarre murders rocks the city of Tokyo. Tokisaka Reiji, an ex-cop turned private eye, joins the investigation at the behest of his friend...

OshiRabu: Waifus Over Husbandos ~Love･or･die~
Unlucky otaku Akuru Hayahoshi could never pull her husbando in the gacha game she’s obsessed with, no matter how much money she threw at it– Until one day, she ran...

Noble Works
Takumi is a normal guy who barely gets by with part-time jobs. One day, he was asked to attend the prestigious private school Rokuroku Gakuen while impersonating a rich student...

Target: Pheromone
Takuya Sakuragi has recently moved to Tokyo to go to college. Conveniently, his brother Takashi and his new wife live in the area, so Takuya moves in with them while...

Romance
Shimada lives in the same apartment and works in the same company with his friends Fujimoto Hiroshi and Ogura Nana, leading a monotonous life of nine to five every day....