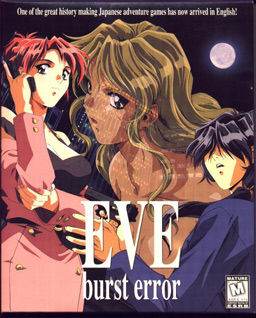 In this game there are two heroes, Kojiroh and Marina, who are each called to solve their own cases. This game allows you to switch characters at any time to solve the mysteries these heroes encounter. This “Multi-Sight Adventure” allows you to view what’s happening behind-the-scenes from the other character’s perspective, bump into each other, and sometimes even help each other out. Together, they come closer and closer to the shocking truth through their combined actions and skills of deduction.

Marina’s Episode: Marina is a national intelligence agent with a 99% success rate. Her new assignment is to protect the daughter of a Japanese embassy official stationed abroad. As you encounter numerous attackers, you become aware of a dangerous government dispute that is the root of all these attacks.

Kojiroh’s Episode: A seemingly down-on-his-luck private investigator finally gets a break, as he is hired to locate some mysterious piece of art. Even though he feels a little weird about this case, the pay is huge! Yet he may be drawn into an unexpected nightmare involving a string of bizarre murders.

Kuroinu Chapter 1
The plain lands of “Eos” located in west “Serenus.” Seven fortresses located in the northern boundaries of Eos served as the setting for the war between the Alliance and Legion....

Venus Blood -Chimera-
The Yupitel Empire is threatened by Taranis, a devil. People try to get rid of them, but they finally surrender… Some time later, a sacrifice ceremony is held. Three princesses...

Dead End Junction
Adventure. Gunslingers. Outlaws. Shoot-outs. War. You’ll find none of those things in the one-horse town of Cow Stone Bell, as Jo will be the first to tell you. Raised by...