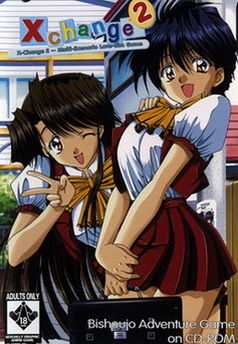 In X-Change 2, you once again take on the role of Takuya Aihara, the unlucky chemistry student at Miyanomori Private School, who has a tendency to get caught in bizarre chemistry accidents that cause you many problems. When a strange chemical turned you into a girl last year, you had a bizarre string of experiences as you learned “how the other half lived.” Now, one year later, you’re enjoying your school life with Asuka, your steady girlfriend. But unhappy days are around the corner, as chemistry club member Chisato uses you as a guinea pig for a new experiment, which changes you into a girl once again!

As a girl, you find you’re much more popular than before, but with practically everyone around you (both male and female) yearning to have sex with you, it can all get to be too much.

Naked Butlers
One day, our protagonist suddenly loses his job and when he’s at his wit’s end, he happens upon a mysterious flier. “30,000 yen a day. A simple job that anyone...

Corpse Party Book of Shadows
This sequel tells a series of short stories that help develop many of the characters introduced in the first game and even explores some hypothetical scenarios, answering those “What if...

Honey*Honey*Honey!
It’s been 30 years since sexual harassment countermeasures changed our way of life. Our day-to-day is governed by strict regulations dictating the appropriate distance between men and women and the...

Inn my wife
A husband and wife runs an inn. While they struggle with business debts, two visitors come calling. “We’ll pay to sleep with your wife,” they say. First the couple is...

Club Life
A reclusive student is forced into joining several clubs, can he make it through the year and will he gain any new friends along the way or even find love....

Hello,good-bye
“Toubu Kaito” That is the fake name assumed by a young military officer from the United Provinces of Japan. He has been tasked with infiltrating Tenshudo Academy, located in Special...