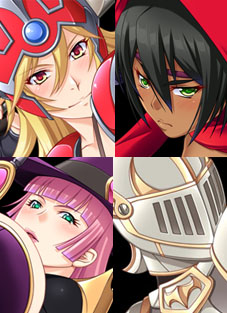 Long ago, in the Age of the Gods, there was a country ruled by orcs known as the ‘Orc Kingdom’ in the northern most reaches of Europe. The monarch of that country, the ‘Orc King,’ was fearfully regarded as invincible.

Flexing his martial might, he embarked on imperial conquest across the land. The Orc Kingdom’s expansion knew no bounds, in time encroaching on the very edges of ‘Asgard,’ a human country under divine protection.

Hostilities between the two nations were brewing when the Orc King’s attention turned to another concern: his son, the ‘Orc Prince.’

For many, the Orc Prince’s aggressive, narcissistic behavior–the result of a spoiled upbringing–had long been a subject of contention. It was only common sense to question the competence of the Orc Prince, who had merely rattled his saber thus far.

After pained deliberation, the Orc King, out of consideration for his followers, appointed the prince to the front lines: to ‘Orc Castle.’ The prince would either demonstrate his competencies, allaying skepticism, or die trying.

The Orc Prince rounded out his arrival speech in high spirits, disregarding the concerned glances of his followers. The dark elf and advisor to the king ‘Misty’ was dispatched to Orc Castle along with the prince. The Orcs could neither advance nor retreat so under her advice the castle’s defences were to be tightened.

Today another brave (or perhaps “foolish” is more appropriate) Battle Maiden, gunning for the Orc Prince’s head, will intrude upon Orc Castle!

Become Tentacle, Attack the Castle and Impregnate the Girls

Trap Shrine
After enduring countless years of ascetic training to inherit his parent’s shrine, our protagonist is surrounded by a parade of cuties with a surprise! Despairing over not being able to...

Forest Fortress
Our protagonist Dale goes to the cursed forest to learn more about the origins of a disease that affected a neighboring village. In his search Dale meets a squirrel-girl Rika,...

Flowers -Le Volume sur Automne-
Yatsushiro Yuzuriha, president of the school’s Council of Nicaea, knows the truth hidden within the school. The silver-haired beauty seeks to prevent Suou from reaching it by giving her what...