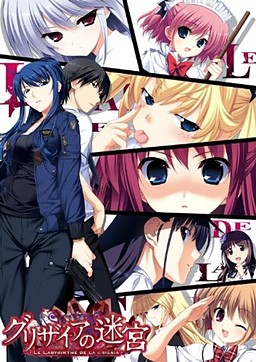 Roughly a year after his arrival at Mihama, Yuuji makes the unexpected decision to pursue promotion within CIRS. The action resumes with Yuuji in a meeting with JB at “corporate HQ,” discussing the documents he submitted for review as a part of the promotion process – said documents pertaining to none other than Yuuji’s own past. Meanwhile, back at the dorm, the girls find themselves unwittingly following along after Sachi and Makina restore the shredded rough draft of said documents.

The irony, of course, being that prominent figures in Yuuji’s past may just be continuing to exert their influence upon the present…

Also includes after stories for all heroines from Grisaia no Kajitsu as well as other side stories.

111 Responses to “Labyrinth of Grisaia”