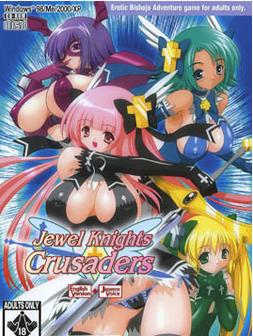 You are Ginji, a Japanese youth whose two hobbies are girls and getting into fights. One night, while walking in a dark alley, he comes across three beautiful females wearing bizarre outfits battling monsters from another dimension. Against his better judgement, he gets involved in the battle, and before he knows it, he’s flat on his back. Waking up in the hospital, he’s surprised to see one of the girls there: she’d brought him to the hospital after he was injured.

The girl introduces herself as Yuki Meno, and tells Ginji an interesting secret: with her two friends Ruri and Hisui, she is a member of a group dedicated to defending peace and justice, called the Jewel Knights, which fights the evil organization Ragnarokkr. What a surprising turn of events!

Ginji isn’t really interested in battling evil — he’d much rather try to get into the pants of Yuki, Ruri and Hisui. The three then learn something interesting: Shinji’s incessant sexual come-ons act as “power ups” for the three heroines, allowing them to increase their skills. They could use someone like him on the Jewel Knights, but he’ll only join the group on one condition — that the girls let him use their bodies for sex. Who will win out, Ginji or the Jewel Knights? Of course, while they don’t want to be used like that, but they’re secretly happy that Ginji is going to be fighting evil with them after all…

Nightshade
Thanks to an age of constant war, the Iga and Kouga had independently achieved an expansion of their respective forces. Both shinobi forces, owing to that long history of warring,...

Shinseiki Evangelion Koutetsu no Girlfriend
A shy female character, Mana Kirishima, starts at Shinji Ikari’s school and immediately admits to finding him cute. Gradually, a relationship unfolds and they end up going on a date....

Witch Act
Hildegard, a young girl who has graduated magic academy and wishes to become a full Witch in the Guild. She is the pride of her family, a genius with skills...

Gyaruzuma Sex
The protagonist, Naohiro, and his wife Risa have been married for 4 years. Their married life is smooth sailing, and the good relationship between them is enough to be envied....