Handa Masayuki and Mayuka have finally gotten married after seven years together. Today, they’re moving in to their new home, and Mayuka’s sister, Natsume Sasa, has come over to help out.
“I’m okay over here, so could you help him out?”
Mayuka ask, and Sasa goes to help Masayuki. While they work, Sasa pushes up close to Masayuki. Suddenly, she says, “I’ve loved you since we first met.”

Masayuki stops working at the sudden confession. Sasa approaches Masayuki and kisses him. Masayuki tries to pull away to avoid being discovered. Masayuki isn’t in the mood, but Sasa tries to tempt him, lifting up her skirt. “C’mon, let’s do it… Nee-san’s in the other room!”

Just then, Mayuka enters the room. Masayuki and Sasa hurriedly fix their clothes and pull apart. Mayuka doesn’t seem to suspect anything when Sasa acts like nothing happened.

Unable to resist Sasa’s charms even if it means betraying his wife, Masayuki begins his secret affair with Sasa.
“You know how I feel, don’t you Onii-san? I’ll be direct: go out with me.” 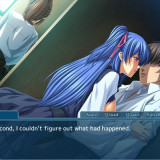 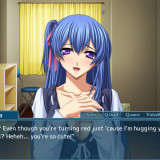 Sandwiched by my wife and her sister

37 comments on “Forbidden Love with My Wife’s Sister”

Dungeon’s Legion ~Maiden’s Bodies Offered to the Demon Lord~
In this game, you play as a Demon Lord in command of droves of monsters. Use your army to protect your dungeon from the invading humans! The game is divided...

A Housewife’s Healing Touch – NTR Route
Gou — the burly village’s head — watches keenly over his son’s unsatisfied wife, waiting for an opportunity to plant his seed in her fertile belly. To reach his goal,...

Sabbat of the Witch
Hoshina Shuuji has a secret: He has a mysterious power that allows him to perceive the emotions of others. One of Shuuji’s classmates, Ayachi Nene, likewise has her own grave...

Musicus!
Kei used to attend a famous high school with aspirations of one day becoming a doctor like his parents, but he stopped for a term due to certain reasons and...

Saimin Gakushuu -Secret Desire-
The protagonist, Soichi Akano, was a failed student who could not study. He is confronted by Tsukino Himemiya, the student council president, who is the most talented girl in the...