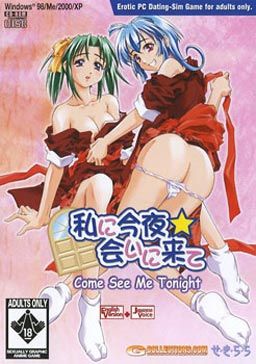 Ryoichi doesn’t know what he wants to do with his life. A very viable option is dumped into his lap when his parents disappear without warning one day. While he’s pondering his next step, a woman from his father’s past, Chidori Yuki, approaches him and decides to help out the young man.

“I own a traditional Japanese restaurant,” she tells him. “Come and work for me, and you can learn to be a chef.” Having nothing much better to do, Ryoichi can hardly refuse her offer, so he goes along for the ride, although he’s a little uncertain that cooking is his destiny.

Things quickly become more complicated when he arrives and meets the rest of the family! Chidori introduces him to her three beautiful daughters, who all work as waitresses in her restaurant. “Get to know my daughters,” Chidori instructs him. It turns out her plan is to have him choose one daughter to marry and eventually take over the restaurant as Head Chef! What’s more, the girls are all actively competing for Ryoichi’s love, bending over backwards to make him fall for them. Considering he’s never had a girlfriend before, he’s really in for some interesting times. Talk about pressure!

All day, he is surrounded by Chidori and her three beautiful daughters, as well as another girl training to be a Head Hostess. It’s a veritable harem! How will he choose just one?

60 comments on “Come See Me Tonight”

Bounce Paradise
Welcome to the Blue Ocean Resort, an idyllic paradise on the beach within Paradise Cove. You find yourself at your grandmother Umi’s beach resort. Looking forward to a great summer...

Sakura Nova
In Sakura Nova, join Mikage, Kaguya, and Arisa as they train together and experience life together in academy life. They all have done trials individually but when the sergeant told...

The Wilting Amaranth
Three women, bound together by the threads of fate, overlap paths within the infamous Witch’s Tower. Each of them, with their own unfortunate circumstances, are merely struggling to live within...

Doushin – Same Heart
Meet the Suruga sisters, Ryoko, Maki and Miho. Ever since their parents died they’ve been living together, getting by as best they can and never feeling lonely because they’ve got...

Study § Steady
Her first lesson about love started when she met you. As you two spend time together, she gradually changes herself to match your type. Perhaps she might call you by...

Negligee: Love Stories
A series of four stories following the characters Karen, Charlotte, Sophie and Jasmin. Following their early lives and the decisions they had to make, whether to follow their heart or...