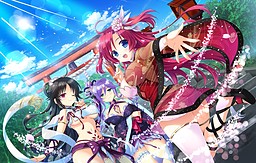 It was a time when people had forgotten their dreams and lost faith. The silhouettes of goddesses revealed themselves to the people who then could only believe in what they saw right in front of them.

The confusion surrounding the countless goddesses appearing in Japan could be explained due to Amaterasu Okami wanting to teach the goddesses about the human world.

All of this brought about the implementation of the Divine Education Act. A year passed and the numerous goddesses and humans got to learn about each other, got to know one another, and came to a mutual understanding.

The subculture holy land and heart of Divine Idol culture, known as Akihabara, housed the seven lucky goddesses that dominated as idols in L☆SEVEN.

Next Generation Goddess Auditions!
Divine Idol chicks, go on to spread your wings!
A glamorous and splendid contest, what a goddess’s dreams are made of, is being held.

Laugh, grow, and even cry with the goddesses who descended from the sky and are aiming to become top level idols.

If My Heart Had Wings

Orion: A Sci-Fi Visual Novel
Sam is afraid. And why wouldn’t he be? He’s just been told that his home, Section 6 of the Orion Torus, is going to be destroyed within days. Encoded messages...

Sono Hanabira ni Kuchizuke o: Anata o Suki na Shiawase
Reo fails her classes and Mai helps her to pass. To reward Reo for passing her quiz, Mai agrees to go on a date with Reo. One day during class,...

Trap Genesis
After settling out the ban on love imposed by Tamaki and Subaru, peace returns to the life of our favorite group. Finally, it’s time for the festival… unless a certain...

Tokyo Dark
Legend tells of a door deep below Tokyo’s sewers. All who enter are lost forever. Detective Ito’s partner is missing. Explore Tokyo & uncover the darkness that lays beneath the...

Trinoline
One hot, midsummer’s day, Shun Nanami’s sister drowned to death. It’s a memory he will never forget, which has become lodged forevermore in his heart. He decides from then on...

Ludesia
In the year 3000, at the giant closed institution, LUDESIA, a distinctly original culture called TECHNO-GOTHIC was developing. It was a combination of the medieval times gothic and the highly...