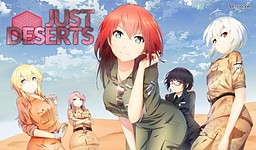 Just Deserts is a sci-fi action dating sim where you play as a soldier who must protect a city from mysterious alien attack, while at the same time need to capture the heart of your dream girl(s)!