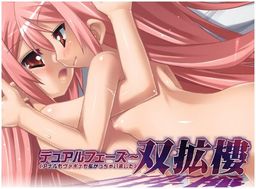 Twin sisters Nozomi and Kanami have a relationship that goes decidedly beyond that of “sisters”, teasing one another and making their pussies and ass swell. The two spend many happy hours pleasuring each other, however, when their parents, who are having marital issues, decide to divorce, it’s decided that the two will be split up.

Their feelings for one another escalate, and they realize that once something has been broken, it can never go back to the way it was…

How will the two handle being separated, and what will become of their distorted love?

Abaddon: Princess of the Decay
This tale is set in the haunted Ayakoji Mansion, nestled away deep in a dense, dark forest. Professor Yamanobe, a...

Destiny’s Princess
The setting is the Warring States Period of a world slightly different from this one. The heroine is the princess...

Immoral Study 2
The main character is Professor Hitosuji, an excellent and well-known tutor. He can turn failing students into straight A students.His...

G-senjou no Maou
You play the role of Asai Kyousuke, the son of a legendary gangster infamous in the underworld. You spend your...

Little Busters! (STEAM)
Capturing the hearts of countless fans since 2007, Little Busters! is an emotional visual novel from Key, the minds behind...

Taimanin Yukikaze
Dark existences were secretly invading Tokyo, the diabolic city. Behind the success of ninjas of justice called Taimanin, the darkness...

The Eden of Grisaia (Steam Edition)
A boy trying to find the paradise he once lost arrived in a secluded garden at the end of the...