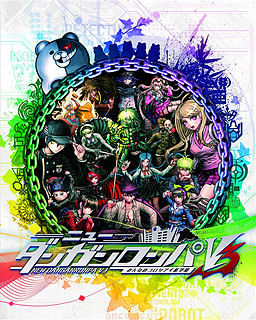 Like the title “New” implies, the game has a completely different storyline, characters and environment than the first three games (the “Hope’s Peak Academy” storyline ends with an anime series), with only the series’ mascot Monokuma returning. The game features a new killing game called the New Killing School Life. The new setting is called Gifted Inmates Academy or the Prison School for the Gifted. The Academy (and hotel) is in a garden surrounded by a cage. It’s implied that the story is set in the future.

The overall theme is mentioned to be “psycho cool”, unlike the “psycho pop” and “psycho tropical” themes of the first two games. The visual style will have a “cool adult-like image” and the Class Trials will have “high-speed reasoning action”. While the storyline and the sixteen new characters are different, the gameplay is similar to the earlier games, including exploration, talking with other characters and the Class Trials. It will have notable additions and improvements, though, like the possibility to use your own lies to defeat opponents during the trials.