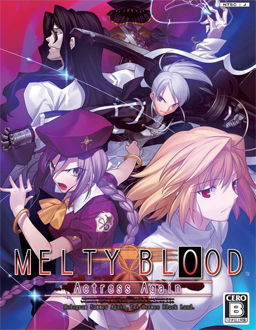 Tohno Shiki hears of a new series of murders in Misaki similar to the one’s that took place Tsukihime. Whilst searching for the murderer he meets Sion Eltnam Atlasia who initiates a fight with him, attempting to capture him. After fight she reveals that her reason for attempting to capture him is to get in contact with the “True Ancestor” (referring to Arcueid) so that she may acquire information on the “cure for vampirism”. Shiki then decides to help her with this task.

Melty Blood is a 2D fighting game. The first couple of PC releases had adventure style stories with branches and multiple number of endings and a secondary story in arcade mode. Later versions only have the arcade mode, but they have many more characters.

Leave a Reply to takat